On Tuesday night six finalists entered the ring for the grand final of startup competition Get in the Ring. The entrepreneurs from the businesses DOT, OnOff, Biodencell, Aquanos, LIK and SpeakEZ pitched in front of a five-member champion jury and a 800-strong crowd at Plaza Mayor in Medellín. We take a look back in reverse, from late evening to morning.

Tuesday, March 15, 21.35h. During both the middleweight and lightweight fights, Eric Kim Yoon Ju from DOT, inventor of an innovative braille smartwatch, repeatedly mumbled his pitch to himself. It pays off when he finally walks through the stage doors and up to the ring, he delivers his pitch with style and accuracy. Standing opposite from the quiet and thoughtful South-Korean is Taïg Khris from OnOff. He’s a French charmer. A streetwise entrepreneur who immediately has an answer to everything. After high quality pitches, the venue turns DOT-blue of glow sticks held up high by the public. The focus goes to the champion jury, who have the final verdict.

Then Khris panics. Is it the nerves? “What’s wrong?”, asks ringmaster Keith Wallace. “I lost my bag. My passport is in it, my wallet, everything!” Also top entrepreneurs – Khris’ company is in the heavyweight category and therefore worthmore than 10 million dollars – prove to be mortals. Fortunately someone in the audience waves with his bag. All the spotlights were focused on Khris for one moment. But not for long, because DOT wins the Get in the Ring-heavyweight title. Champagne corks and confetti fly! 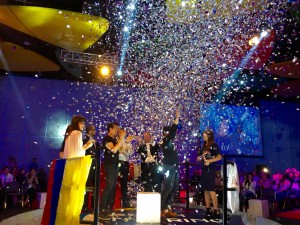 21.03h. Claudia Cecilia Restrepo Serna enters the ring. It’s a home tie for the Colombian. Her startup Biodencell takes on Udi Leshem of the Israeli company Aquanos. They answer every question fired at them, rapidly. It looks like a battle for life or death. Actually it is. Why should they win? Restrepo: “My stem cell banks save lives, simple.” Leshem, who discovered a waste water technology: “Every year more people die from polluted water than anything else in the world.” The audience holds up their colors, it’s half red, half blue. The judges don’t know either, their deliberation goes on and on. Finally word reaches the announcer: Biodencell. Loud applause erupts. A man waves his flag with frenzy and chants: “Co-lom-bia! Co-lom-bia!”

19.12h. The grand final starts. Yesterday (Monday) 20 entrepreneurs battled in the last selection round. Six of them qualified for tonight. The first finalists – Eyal Cohen (Israel) from the translation platform SpeakEZ, and Yassine Faddani (Morocco) from the app LIK – are introduced to battle it out for the lightweight title, and the audience goes crazy. It looks more like a football match than a pitching competition. The judges sit right in front of the ring just like a boxing title fight in a Las Vegas hotel. The lights are dimmed, the battle starts. Cohen and Faddani must pitch through five different rounds, which deal with seperate issues like the team and finances. It’s a close fight and ringmaster Wallace creates the tension, but he ultimately raises Faddani’s arm in the air. The app that allows users get free minutes or data in exchange for advertising grabs the lightweight title. In the green room, the Moroccan victory is celebrated exuberantly.

What happened before the final

18.35h. Half an hour before the final. Backstage the original 20 finalists are sitting with their flags on their lap. Ringmaster Keith Wallace appears in an immaculate tuxedo. “I am very excited, mostly because the air conditioning is working,” he jokes. Wallace is a showman. He knows how to entertain. “It’s actually very good if you occasionally disagree,” he instructs the champion jury, who sit patiently waiting in a semicircle.

16.48h. Two hours before the final. The Get in the Ring organizers are working overtime. Chief Organiser, Corrinke Boon doesn’t have much time, but she says: “Yeah, it’s hectic now. But that’s how these things go, everything will be fine.” Then someone else needs her. Relaxed she switches between a decision about the national flags, a question about the drinks and assesses the award statues. In the arena her colleagues, hunched over a small table, are going through the script and checklist, again. “And then the finalists come one after the other through that door over there.” 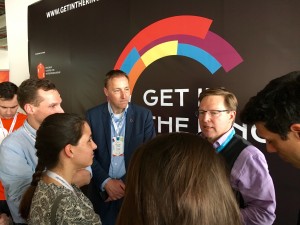 Writing along with the ‘Growth Guy’

14.15h. Five hours before the final, another Get in the Ring event takes place. “How do you people make notes these days? Get your phones out or something!” Verne Harnish, better known the ‘Growth Guy’, summons the startups to take notes and the crowd’s smart phones light up. A select group of Get in the Ring startups and organizers are listening to champion Harnish, founder of the Global Entrepreneurs’ Organization and an expert on business growth. Even the main event finalists, Restrepo from Biodencell and Khris from OnOff, put their preparations for tonight on pause to attend the workshop. “Write down who are the top 25 most influential people you need to get behind your business. When you’ve done that, contact them”, he said matter-of-factly. Full of colorful stories and anecdotes alongside lots of gesturing, Harnish leads his crowd through his own entrepreneurial journey. As if the Get in the Ring finalists did not already have enough information to absorb, they listen intently and ask all the questions they can. In the end everyone is taking notes.

A deal in progress

Back to the stage on Tuesday night, and to DOT’s moment of fame. Champion Ingrid Vanderveldt, businesswoman and investor, doesn’t hide her enthusiasm for Kim Yoon Ju’s braille smartwatch. “What percentage of your business do I get when I invest $3 million in your startup?”, she asks. “15 percent”, replied Kim Yoon Ju. Vanderveldt nods, satisfied. A deal in progress.

In the green room after the final the Korean says that besides investments, he especially hopes for exposure. “Our device targets 285 million blind people around the world. Get in the Ring is a global competition with global exposure, winning improves our chances of reaching them”, said Kim Yoon Ju.

22.05h. The last people leave the arena. In the green room, the organization cleans up, and the finalists – including Taig Khris – pick up their bags before boarding one of the waiting busses. They’re off to the Medellín nightclub Sixttina for the afterparty to blow off steam from the past two days, to celebrate victory or to drown the sorrows.