The Hague, Thursday 29 October. With the global livestream that saw Dutch impact startups Circularise and SolarDew walk away as winners, Get in the Ring’s startup pitch battle show returned home to the Netherlands. Part of the Municipality of The Hague’s ImpactFest, Get in the Ring The Netherlands – Impact was aimed at testing, proving and scaling promising Dutch impact startups internationally. To do this, they activated a global network of investors, corporates and governments. The competition consisted of a dealmaking day on October 27 and culminated on October 29 with two finalist pitch battles, viewed by a global audience.

The Dutch finals marked the beginning of the European Get in the Ring Impact Competition. Using the United Nations Sustainable Development Goals (SDG’s) as a reference, the Impact Competition has events in six leading impact hubs across the continent.This is an initiative of Unknown Group – the parent organisation of Get in the Ring – and ImpactCity The Hague, who are united in identifying and scaling promising innovations able to solve 21st century challenges in the domains of food, water and energy. 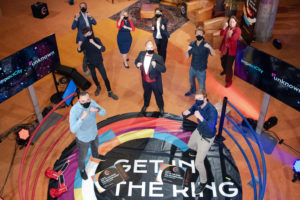 Impact startups from around the The Netherlands were invited to apply for this event, from which the 26 most promising solutions were selected to participate in the Dealmaking Day on October 27. On this day, participants were matched with investors, corporates and governmental partners in order to test and scale their solutions. These included experts from Unilever, PureTerra Ventures, Eneco, EIT InnoEnergy, Royal HaskoningDHV, Peak Capital, Future Food Fund, VenturesOne, 4impact.

The Dealmaking Day culminated in a deliberation by a jury that consisted of international business experts and investors. They evaluated the startups on their impact and growth potential. The four finalists chosen to compete in the final pitch battle were Ampyx Power, SolarDew, Circularise and Willicroft.

The pitch battles were viewed by people from over 20 nationalities, from India to Iran and Canada to Australia. The battles were divided into four rounds – business model, value proposition, impact potential and need/proposition, after which they were confronted by questions from the jury and the livestream audience. The first battle had The Hague’s own Ampyx Power taking on SolarDew. The battle was won by SolarDew, whose desalination technology impressed the jury because of how rapidly it can be deployed to provide clean drinking water.

The second pitch battle saw Circularise compete against Willicroft. In a closely contested fight, Circularise were able to convince the jury and audience of the scalability of their blockchain-based platform to make raw materials traceable, giving them a digital identity and protecting stakeholder privacy.

To close out the event, Deputy Mayor of The Hague, Saskia Bruines awarded Circularise and SolarDew a ticket to the Impact Finals in The Hague in April 2021. She said:

“I congratulate the two winners of the Dutch GITR Netherlands – Impact Competition: Solar Dew & Circularise! In ImpactCity The Hague, we actively support companies ‘Doing good & doing business’ and these two innovative startups are a great example of this!”

The Director of Get in the Ring, Jurgen Nieuwenhuijsen said: “I’m really proud of how we pulled Get in the Ring The Netherlands – Impact off with ImpactCity. Today was only the kick off of the Impact Competition, it is far from over. Now, we go on a tour of six leading European impact cities and then return to The Hague for the Impact Finals in April 2021.”

The six city-wide Get in the Ring Impact Competition stamps its passport next in Berlin (November 19), Lisbon (December 4), Geneva (February 18 2021), Oslo (March 16 2021) and Copenhagen (March 18) before returning To The Hague for the Impact Finals in April 2021. Circularise and SolarDew will be joined by the winners of these city events, when they will compete for a convertible loan of up to €500,000.