Last year rugby officially became an Olympic discipline! This fast growing sport no longer constrains its popularity to the Commonwealth countries but is also spreading around the globe. Now everybody is playing rugby from Argentina to Japan. If your idea of this sport is 30 men running and hitting each other, you are in a big mistake – there is a subtle science behind it. RugbyCentric is giving tips and hints on how everybody can become the new Richie McCaw!

RugbyCentric is the Lightweight winner of Get in the Ring France. The startup created two platforms dedicated to rugby performance and targeting players and coaches of all levels globally. Today we sat with the founder of the startup Guillaume Bourda to learn more about the story behind RugbyCentric.

STORY
It almost looks like the way Facebook started. Guillaume and Sean met during their studies at Oxford as they were both passionate rugby players and were part of the university team.  The first ideas and concepts came to the French engineer while discovering the semi-professional rugby preparation of the OURFC Blues team. He decided to develop the first prototype – getting some inspiration from the currently running apps such as Nike+ and RunKeeper.   Later on, the founder asked for the advisory to Sean on the S&C aspects of the prototype. And while Sean was about to get into professional rugby, Guillaume was validating an MBA. So there was the perfect match of experience and capabilities and in the most natural way, RugbyCentric was born.

HOW IT WORKS
RugbyCentric created two applications for rugby players and coaches.

Player+ is leveraging on gamification design techniques to motivate players to achieve their rugby potential. Players can log and track their preparation as well as their game stats and in the process win points, earn badges, pass levels and see the evolution of their avatar.  They can also compare themselves with players from around the world and even get professional S&C coaching. The app can be used by pros, semi-pros or weekend warriors of all ages. 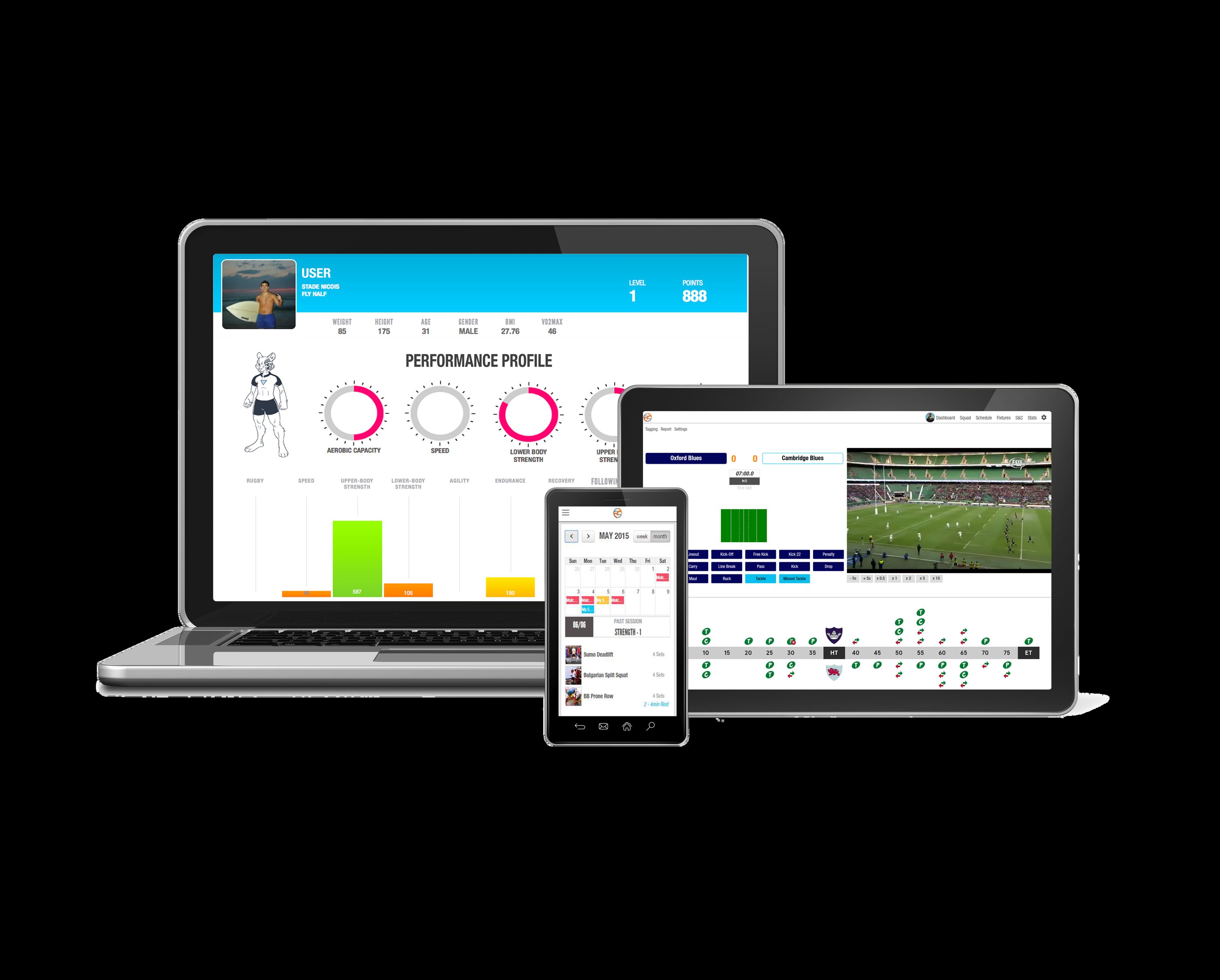 Coach+ on the other hand is built for rugby coaches. It provides all the digital tools a modern rugby coaching staff needs: injury and wellbeing management, player skills rating, individual objectives, strength and conditioning programming, etc.  The platform even embeds a video analysis module than can be used in a live mode in front of the game or at home with a video of the match. Once performed the collective and individuals stats can be exploited by the staff and shared with the players.

Both applications can run standalone but when Coach+ connect with Player+ they complement each other in a perfect way. Coaches have their own management platform while also receiving data from their squad members; players have their own app while also getting s&c content, objectives and game stats from their coach.

The startup is still young but the list of their achievements is longer than a Gordon Ramsay’s cooking book. With Player+, RugbyCentric already sold online rugby-specific summer strength and conditioning programs to more than 200 players across Europe and Argentina: the ‘Rugbycentric Summer Camps’. They also partnered with the Swiss Rugby Federation to help the Swiss Women National Team prepare for their 2015 European Championship.


“The Swiss players loved the concept and it seems that the program had a good impact: the team went up to the final for the first time!”.

On Coach+, they have been working with the Oxford University RFC Blues team and they recently signed a one-year partnership program with the Rugby Club of Toulon (RCT) academy. Another pilot program is about to be signed with the Belfast Met Rugby Academy in Ireland.

CHALLENGES
All of the success does not come without challenges. According to Guillaume, their biggest challenge is to accelerate and go from being a ‘garage’ startup to being a commercially successful company.

“With the visibility, we got from winning ‘Get in the Ring’ France we are already getting advisory from the local chamber of commerce – some funds would now help too. In any case, we are a team of competitive rugby players, we love our game and aren’t afraid of challenges!”

Thankfully, the team has also built a network of consultants that are contributing in areas such as marketing, software engineering or graphic design.

“Our artist in charge of avatars design is a Japanese woman based in Singapore; our graphic designer in charge of badges is  American and the other consultants are from France. They know our project well and are behind us to help accelerate the project.”

CONNECTIONS
Rugby is surely on the right track to becoming the most popular sport around the globe and RugbyCentric is surely helping with that. Player+ and Coach+ offer a unique way to boost coaching efficiency and player performance. The startup is looking for mentoring and to recruit a new engineer! If like us you love this startup project and want to help them with any of the above, reach out at corrinke@gitr.co and we’ll make it happen!