On the 17th of November,  The Hague was the epicenter of innovation and excitement in the Netherlands. The The Hague University of Applied Sciences hosted to more than 3000 visitors who gathered to learn from each other and talk business.

More than 350 startups applied for Get in the Ring the Netherlands to compete for a spot in the ring, have speed dating sessions with corporates, NGOs and governments and participate in trainings.

DATING FOR SUCCESS
Over 50 corporates, NGOs, governments and investors were lined up for Get in the Ring Matchups, to speed date with startups. With a Tinder-like match made in advance online, the speed dates were curated on mutual interest. During 600 speed dates, entrepreneurs grasped the opportunity to pitch their company, and explore potential collaborations, launching customers or investors. Already more than 60 percent of the speed dates had a follow-up and more will follow soon! 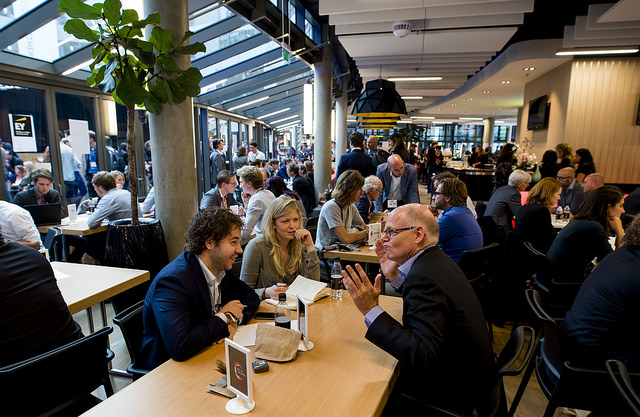 COMPETE FOR EXPOSURE
The 100 most promising startups were selected to pitch for a spot in the ring. A selection jury consisting of high-profile investors and entrepreneurship experts had the task to pick only 6 startups to pitch on stage during the Live Battles. After more than 4 hours of pitches, the judges gave their verdict and the nerve-racking hour of battle strategies for the 6 finalists began. And all the other startups? They were invited into the investor’s lounge, where more than 150 investors gathered to network with them!

In the meantime, the Champion jury members took their places around the ring. Who they were? Founder of DQ&A and partner of Peak Capital, Heleen Dura; Founder and CEO of the Dutch unicorn Elastic, Steven Schuurman; and investor & boardmember of Macromill, Han de Groot. As they prepared themselves for the heavy responsibility of choosing the most promising startups in the ring, the heartbeat started and Hendrik Halbe, co-host literally fell  out of the air and landed in the ring. Together with global ringmaster Keith Wallace, he invited HRH Prince Constantijn van Oranje in the ring to officially open the Live Battles. 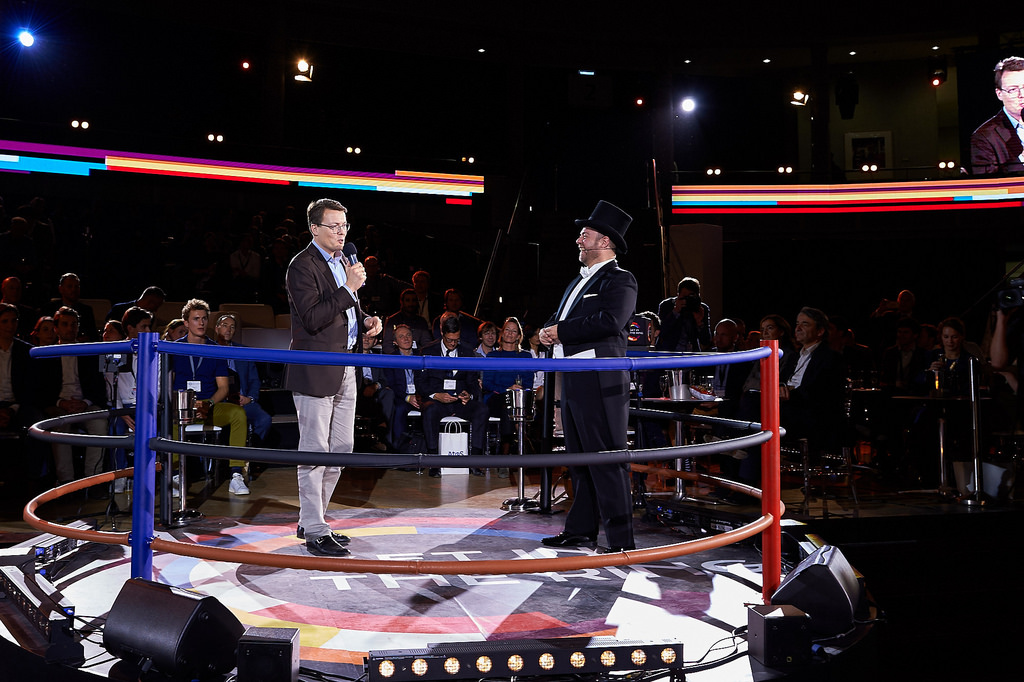 The tension was growing with the first two startups entering the Ring. In the red corner, Tim Wanders of WeParc delivered fiery pitches to convince the Champion jury, as the easiest way to get a valet to park your car. The opponent of Tim was FreshStrips: a company that invented stickers to measure the freshness of goods in supermarkets. With some final verbal blows delivered, the indisputable winner was FreshStrips.

The stairs colored red and blue, as the crowd prepared for the middleweight battle. A face-off between Edorado, an electric speed-boat manufacturer in the red corner, versus Ruben Wieman from Flex-Appeal. The youngster delivered a passionate pitch, convincing both the crowd and the Champion jury that his app creates a better way for employers to communicate with part-time employees, increasing both engagement and work satisfaction.

After such an exhilarating battle, the crowd was warmed up by the global ringmaster for one more time, as the heavyweights were coming down the stairs. Zivver, a cybersecurity startup that protects your personal data on the web, versus Mellon Medical, a company providing surgeons the opportunity to stitch with one hand, instead of the traditional two. Although both startups are very promising, the potential impact of the innovation of Mellon Medical was decisive, sending Lieuwke de Jong to the Global Conference in Singapore.

A TRIPLE LAUNCH OF CHALLENGES
Right before the heavyweight winner was announced, Jan-Kees de Jager, CFO at the biggest telco in the Netherlands, has an announcement. Inspired by the innovative startups he met during the day, Jan-Kees decided that it’s time for KPN to work with startups, applying innovations to improve their customer experience, with a Challenge.

But that wasn’t all: Rob van der Werf from ASML takes the mic and states that they’re always on the bleeding edge of innovation. Once a startup within Philips, they’re now one of the most innovative companies in the world in the high tech industry. Considering this, ASML is always looking for new innovations and therefore also announcing that together with Get in the Ring they’re looking for startups to work with!

At the moment you think this cannot get any better, Pieter Hartog, MD of APM Terminals, the most innovative terminal in the world, declares that, for the third consecutive year, they’ll start their Challenge in the field of smart logistics in the first quarter of 2017. Look at getinthering.co/challenges to find all info.