Brazil is one of the most entrepreneurial countries in the world! According to Techcrunch, every 1 out of 4 people is self-employed in some kind of a way, and the easy internet access and technology development has boosted these numbers even more. This is why we were anxious to see what solutions the Brazilians startups had to offer!

On the 16th of March, the first ever Get in the Ring event was hosted by Grupo Rede Mais in Salvador. Under the sounds of the local favela musicians Quabales, startups were getting ready to battle in the Ring and have a taste of the competition format of Get in the Ring. Teatro Vila Vilha opened its doors for more than 200 guests from the Brazilian startup ecosystem to support the local entrepreneurs and make valuable connections. 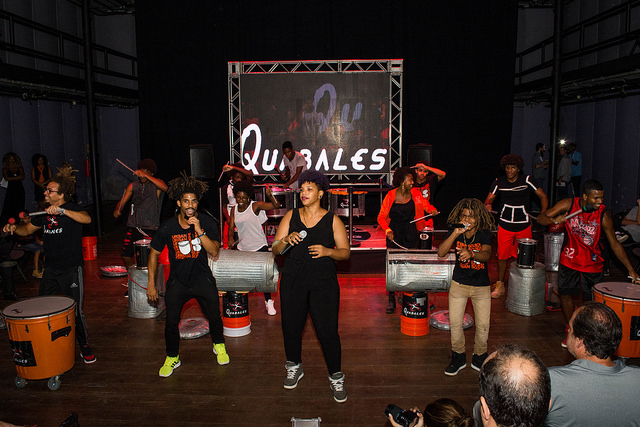 Get in the Ring Salvador has made an epic impression on the local community and received a heavy TV presence by the biggest media outlet in Brazil – Rede Bahia. The organizer of the event Rodrigo Paolilo also highlighted the importance of the event for the Brazilian entrepreneurs.

The event opened with a keynote speech by one of the major ecosystem players and investors in Brazil, the serial entrepreneur – Marco Poli! Marco directly set the tone for the battles by asking the ultimate question: “What do investors want?”. Warmed up by the speech the audience was anxious to participate in the event as well. Equipped with a mobile app created especially for the event, they could cast their vote for the startup’s battles and help the Champion jury member with their tough decision.

WINNER
In four fierce battles, 8 startups pitched their hearts out to become the next holder of a ticket for the Get in the Ring Global Conference in Singapore. With a knockout pitch, the winner of the night was announced – ARPAC. ARPAC’s founder Eduardo da Costa couldn’t hold his excitement when commenting for Rede Bahia:

“In Singapore, I am going to show what Brazilian entrepreneurs are capable of”

Eduardo was inspired to start his company after surviving a crop dusting airplane major crash. Even though he continued with a promising pilot career, he always had an idea in his mind to prevent future accidents for other people. After a few years, Eduardo started the company only to realize the great potential of the idea, he created a drone for spraying pesticides on agricultural crops. Now ARPAC  built two drones that solve one specific problem: one drone for biological farming control, that flies up to one hour and a heavy-lifting pesticide spraying drone. 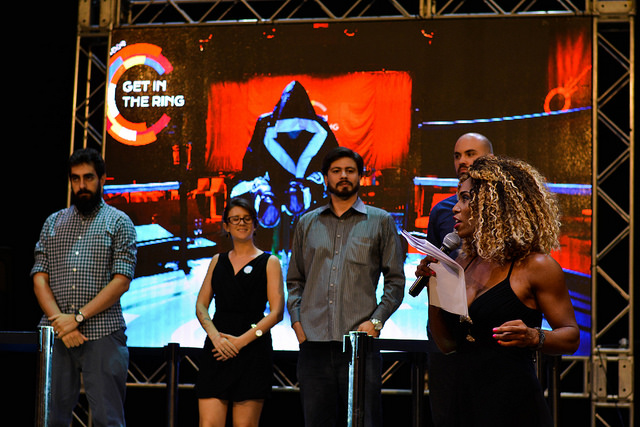 RUNNER-UPS
Defesas e Recursos created a platform which provides the citizen with the possibility to defend against offenses related to car traffic, applied unfairly by traffic authorities.

Up (Universo de Posibilidades) has a  platform and app that enables students to make more consciously choices. UP gets outside of the common sense of career choice information by breaking stereotypes and showing people’s real experiences. They create value by selling the content for schools and universities.

GeoProfitStrategy Geoproft maximizes the revenue of water, gas and energy distributors in the activity of debt collection and cut-off supply. We already increased 21% the collection in this activity. In order to make the millions of debtors pay their debts, it is practiced the cut-off supply. As this activity is expensive and involves logistics, only about 7% of these debtors are cut-off. So, the system selects which customers should have to be visited delivering optimized routing by revenue.

Kapputo offers a simple web-based, easy to use and understand dashboard with relevant customizable information and analysis on prices, construction impacts on demand, price and market trends in order to facilitate the decision-making process.

Futs app is a soccer app that keeps you updated about what is taking place with your favorite team and championships, in addition to shopping and interacting with your friends.

The first Get in the Ring event in Brazil excited the local audience and put under the spotlight the most promising Brazilian startups. Startups, investors, and entrepreneurship enthusiasts all gathered under one roof to boost the speed of innovation in Brazil and also set the grounds for future successful events that will excite the community!

We want to thank the organizer of the event Grupo Rede Mais as well as the numerous partners RG7, Sebrae, +Innovators, Goverment of Bahia, Correio, Plano A, Fecomercio BA, StartOnApp, TV Aratu, The speaker, CRA BA, DPI and everyone who supported and brought awareness to event!